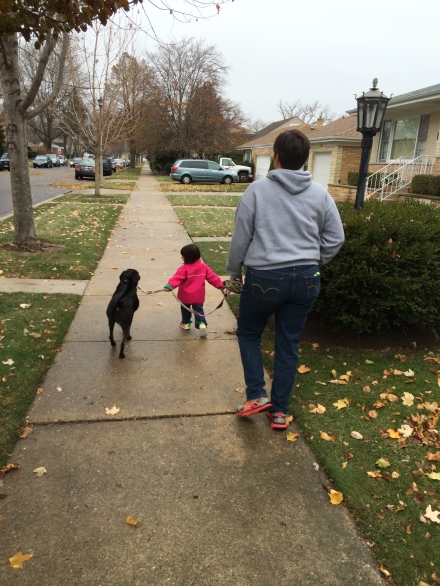 Every so often, I am struck by the fact that I have been making a huge mistake as a teacher and I suddenly wish that I could run around and gather up all my former students to apologize.

Well this morning, while on a family walk, I had one such realization. My wife and I had taken our daughter and our dog out for a Sunday morning walk.  My wife and I were chuckling as we watched my almost-two year old struggle to hold the leash of my rather unruly lab-mix. And I was struck at the “conversation” that was occurring amongst the three of us.  I say “conversation” in the loosest sense of the word because my daughter has a whole lot to say, but only about 10% of it is understandable to any other human.

Anyway, I realized that all of these words that we had been trying to get her to say earlier in the day, were suddenly flying out of her mouth because she needed them and they were useful to her. She didn’t say them when we wanted her to say them. She said them when she had something that she needed to say.

And then it hit me.

For some reason, this moment, this walk, this authentic use of language by my daughter, it all made me realize that I had been making a terrible mistake.

I then gather a group of students and purposely break the silence because I have a lesson I need to teach to this group of students.  It is, of course, okay for me to break the silence. That is different than if the kids were to do it.  So I am leading my small group of readers, in something that I am sure is really important. And all of a sudden I am distracted.  There are two boys over in the pillow corner. They are curled up amongst our collection of pillows and they are both reading Fablehaven by Brandon Mull. And they are whispering. GASP. That’s right, they are whispering and gesturing in an exaggerated manner.

I am appalled that they have interrupted my work with my small group and that they have potentially interrupted the other students who are trying to maintain my demanded silence.  So I give them the look.  They ignore me.  I try again. They ignore me. They are way too wrapped up in their conversation to notice my looks. So then, I apologize to my small group of students, I walk over to the two offenders, I bend down next to them and explain that when they talk during independent reading, it stops the rest of us from being able to think as deeply as we need to and want to.  I smile. They smile. They look at me. And they say, “But Mrs. Lifshitz. We were talking about the book.” I smile. I nod. And I say, “That’s great boys, but not during independent reading.” And I walk away. And they are good and kind and respectful so they do what I tell them to do.

And they stop talking about the book.

And I have stopped that.

And I look back now and see how very wrong I was.  These kids were itching to talk about books. They were so motivated to talk about book that they defied the silence of our classroom even though they knew they would be risking my very serious teacher look.  And I put an end to it.

I just can’t get over it. How did I not see what I was doing?

But here is what I know.  There is no point in lamenting what I have done in the past. I have recognized that it was a bad choice and now I need to look ahead.  Now I need to think about how I am going to do things differently. Now that I know what I know, I must think about how I am going to run my reading workshop so that it nurtures authentic discussion about books instead of hindering it.

Of course, as often is the case, I have no real idea. But I know that I am going to start by talking to my students.  I want them to know that if they are so moved by a book that they need to talk about it, I want them to feel like they can do that. And then, together, we will come up with a way for them to have those conversations so that it does not stop those around them from their work and so that it does not take away from their own time to read. I think that we will find a way together for there to be more conversation when the students authentically need and want them.

And if nothing else, I know that the next time I hear students talking during independent reading, I am going to think twice before giving them any sort of serious look. I am going to start by trusting them and giving them a chance. I am going to start by believing that the work they are doing is helping to make them better readers.  And then maybe, I will pull up a chair and just ask them what it is they are talking about.  I have a feeling that more often than not, I will be genuinely pleased with what they have to say.