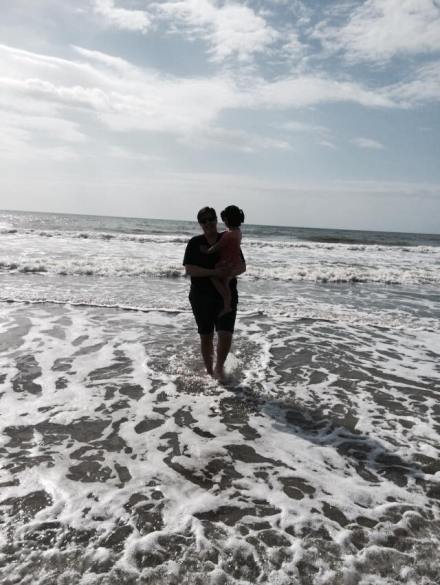 Two weeks ago, my wife and I drove with our three-year-old daughter from our home near Chicago to Myrtle Beach, South Carolina.

For most of the drive, one of my my biggest worries was the said three-year-old daughter and the likeliness that at any moment it was possible for her to turn into something resembling a monster should the conditions warrant such a transformation.

For most of the drive, one of my biggest worries was where we could stop for a bathroom break since my daughter’s idea of giving us advanced warning of her need for a bathroom involves approximately thirty-five seconds before it is too late.

For most of the drive, one of my biggest worries was what podcast we could listen to in order to stay entertained ourselves without exposing our daughter to anything too intense.

For most of the drive my worries included: How much battery was left on the iPad my daughter was clutching in the backseat. How easily accessible the car snacks were. What I would do if I needed a bathroom break, myself, after my daughter had just fallen asleep.

These are the worries that consume any family while driving halfway across the country with a toddler.

And then we began to near the border of North Carolina. North Carolina who had just passed the hateful anti-LGBT legislation known as HB2. The bill had been passed just days before we began our drive to South Carolina and for many of those days, it was a thought it my head. It was there amongst the thoughts of the beach, of the packing, of the car snacks, of the ocean, of the time with my precious family. It was there in a way that gave me pause and led my wife and I to discuss, “What are we going to do when we get to North Carolina?”

Because, as a lesbian-headed family, we knew that while the worst parts of this law made the lives of any person who is transgender and living in North Carolina much more difficult, it was also a law that sent the message loud and clear that people like us are not welcome in the state of North Carolina.We are not protected there.  It sent the message that the legislature of North Carolina would move heaven and earth to guarantee and to make it clear that there would be no legal protections that would stop their citizens from discriminating agains those of us who are LGBT. It sent the message that this was not a state where we could be who we are and know that we would still be granted equal rights and protections.

And that does something to a person.

Knowing that if we walked into a store as a family, we could be turned away for being gay and there was nothing we could do about it. That does something to a person.

Knowing that a person’s “religious freedom” to hate was more important than our civil freedom to be who we are and still feel safe and protected. That does something to a person.

Knowing that when we gave our money to any business in North Carolina, that we would be giving our money, in part, to support a government that passes laws filled with hatred that stopped people just like us from feeling safe. That does something to a person.

Knowing that our own child, our three-year-old child, could potentially witness her moms being told that they could not shop or eat or drink in any given place because of who they are. That. Does. Something. To. A. Person.

I don’t want to have to explain that to my kid.

And when we crossed the state line into North Carolina. We felt it. We took a deep breath and we just hoped for it to be over soon. And we drove. Probably a bit more quickly than we should have. But we drove, knowing that, luckily, we were only passing through.

And as we drove. It started to hit me. We were lucky. This was just a state we had to cross while headed to our final vacation destination. What about all those people whose lives are here? What about the children who are transgender who are growing up here? What about the gay and lesbian families who have to explain these things to their own children because they don’t have the convenience of simply stocking up on snacks and drinks and gas and driving faster than they should so that they can avoid this state all together? What about the LGBT youth who have watched their own home state pass legislation that they know will make their own lives more difficult?

How did we let this happen to them?

And once or twice, as we drove across that state, those thoughts were enough to bring tears to my eyes. Because I feel like we have let so many people down. And, yes, it is inspiring to see all those who have come out and spoken up against this new law. It is inspiring to see the businesses and rockstars and sports stars who are taking a stand. But none of that erases the fact that this happened in the first place. None of that takes away the pain that is in the hearts of so many in this state. None of that changes the fact that this law is still here and this hatred is still allowed. Allowed and protected.

When we were two-thirds of the way through North Carolina, our toddler woke up and told us she had to go to the bathroom. So my wife pulled into a gas station and I took our daughter inside to go to the bathroom.  As we were walking towards the back of the gas station, my daughter noticed one of those ever-appealing claw machine games. She desperately wanted to stop. I calmly told her no. Well, it was more like I found a way to tell her, “There is no way in hell you are playing that claw machine game,” but without using so many words. She was devastated. But we carried on. We finished in the bathroom and on the way back to the car, she stopped just to watch an older girl playing the claw machine game. I let her watch for a moment. When the girl who was playing managed to actually grab a small, orange giraffe, both she and my daughter cheered in excitement.  The girl who was playing the game happily reached into the machine, pulled out the giraffe and right away gave it to my daughter.

As we got back in the car, I watched my daughter wave at her new friend until she couldn’t see her any more.  I listened as she told my wife the story.  And I couldn’t help but cry a little when I heard my daughter say, “That was so nice of her. There are nice people here.”

Because there is a lot about this world that my child doesn’t understand yet. And I am dreading the day when I have to explain some of those things to her. But my three year old does understand what kindness looks like and somehow she managed to find a bit of kindness in the one state that I had been dreading. And I guess that is no small thing.

So we kept on driving. And we made it through just fine. And we had one of the most wonderful vacations. On the way back home we did it all over again. Our tiny, one-car protest of a state that allowed a piece of hateful legislation to pass.

And I don’t know exactly what to do to make any of this feel better. But I hope that sharing what it was like. To exist in that kind of hatred for just a few hours of our lives. Maybe that is the best I can do for now.

10 thoughts on “Driving Across North Carolina, Luckily Knowing We Were Only Passing Through”