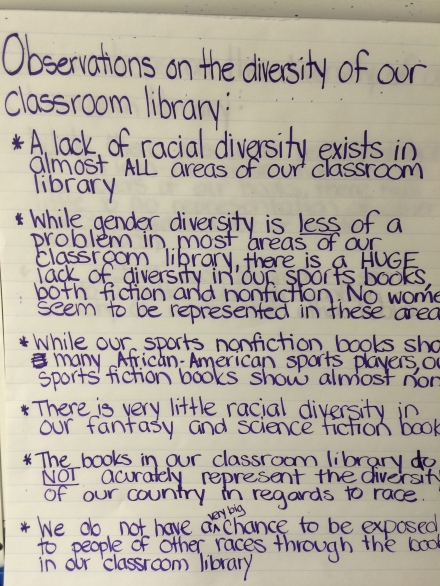 In my last post, I described the work that my students and I have been doing as we attempt to better understand where our biases and stereotypes come from in regards to different races, genders and family structures.

We began with gender.  And after our work with gender, we were ready to try tackling ideas of race.

One of the things that my students and I had talked about with gender and our stereotypes of different genders was how surrounded we are, all the time, by images that shape our ideas and misconceptions. I wanted my students to know that this was true of race as well.

I truly believe that books, of all kind, play a large role in shaping how our students see the world.  So often, children have little choice in what kinds of books surround them.  Even in classrooms and schools where children are free to choose to read whatever books they want, they are still often limited by the choice of books that we adults have placed around them.  And too often, we adults do not think carefully enough about what books, with what images of race and gender and family structure, we are surrounding our children with.

So that is where I wanted to look. At the books I was choosing to put into my classroom library. I wanted my students to join me in looking more closely at the books that I had in my classroom and how they represented and misrepresented the world they are living in.

So we began with an infographic. In fact, the majority of my students had no idea what an infographic was. So first. We had to learn.  This was a good reminder to me to use these rich conveyers of information more often through the year. Anyway, we began by looking at THIS infographic which shares the disturbing statistics on diversity in children’s literature.  This, alone, led to incredible discussion about so many things.

We began with a discussion of the term, “people of color.” So many of my almost all-white students had never heard this term before and it took a while for them to grasp its meaning.  We then had a discussion on the difference between white writers writing about people of color and writers of color writing about people of color. Then we entered into a discussion of how it might be harder for writers of color to get their books published in the competitive world of children’s publishing.  And finally we ended up at a discussion of our own reading preferences and how sometimes we are tempted to read books that discuss lives similar to our own and how much more rewarding it can be to push ourselves to read books that teach us about the lives of others whose lives are different than our own.

All from one infographic.

The children were so eager for the discussion. We actually ended up looking at an entire series of fascinating infographics that show how different kinds of diversity are represented or misrepresented in different areas of society. That series of infographics CAN BE FOUND HERE.

And then we turned to our own books. I wanted to start in my own classroom. I have shared openly with my students that all of this work, on race and on gender, it is work for me too. I know that I make mistakes often and I wanted them to see that I, too, need to constantly do better to work past my own biases and stereotypes. 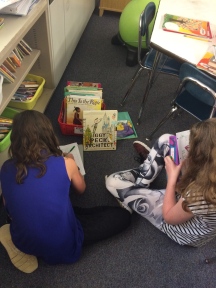 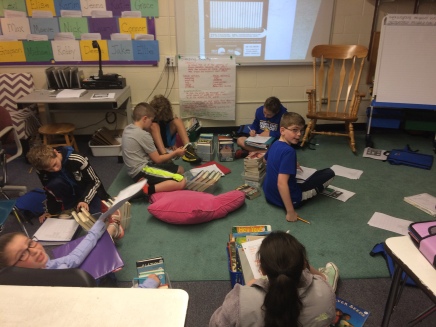 Once the students finished collecting their data, they entered their results into a Google spreadsheet.  HERE ARE OUR RESULTS. 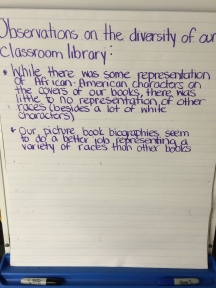 I was kind of blown away, once again, by what my students discovered. I thought I had a diverse library. I really did. In fact, I have worked over the past two years to make sure that I was buying the kinds of books that would help all of my readers to see themselves reflected in the pages of the books in my classroom.  But what I forgot is that the vast majority of my readers are white. They see themselves, in terms of race, in almost every book they pick up.

What they need is something else. They need to be able to see into the lives of others. To use books as windows so that they can gain an understanding of what it means to be a race other than white. They need books to help them grow and become more empathetic citizens of this world. And while I have tried to provide books for them that would do just that, I realized from their work that I have a LONG way to go.

And showing my students that I can look at where I am and find ways to do better in terms of making this world more equitable and just, that is no small thing.

So together we brainstormed ways that I can work to improve our classroom library. We talked about starting with sports fiction. The students noticed that while the nonfiction sports books were filled with African-American people, the books in my sports fiction bin barely had any characters of color.  The exception was The Crossover, which just goes to show how important it was for that book to win the Newberry last year.

Here we have taken an area of our society that is rather diverse and the books that I have purchased that have fictionalize that area of society have completely sucked all of the diversity right out of it.  So I must do better.

And then, we moved on to my fantasy and science fiction books. This was an area that was also very much lacking in racial diversity. And so I will now be on the lookout for books with characters of color in these two genres. I must do better.

These suggestions came from my students and I am so proud of the work that they have done. As I shared with my students, I continue to be proud of our classroom library. I am proud of the choices that I have made in the books that I have put into our classroom library AND at the same time, I know now that I can and must do better. I shared with my students how grateful I am for the work that they have done to help me to see this.

After our counting books, we then used the following pages to look more closely inside of our picture books in order to see how races, genders and families were being represented. The kids chose one of these types of diversity to focus on and then pulled a few books to record their observations and evidence.  Here are the sheets that they used for:

Again, the students had time to discuss their observations and I was blown away by what they were picking up on.

Finally, we headed to our school’s library, to again count books. We collected the same type of data, but this time for our school library. HERE WERE OUR RESULTS.

We realized that many of the trends that we saw in our classroom library, also existed in our school library. One of the greatest parts of this work was listening to the students talk to our school librarian (who is amazing) about the changes that we were hoping to make to our classroom library. This led to other powerful conversations between the librarian and me and I was so grateful for her input and her support.

Our last step was to take part in the incredible campaign, #StepUpScholastic.  My students were able to apply all that they had thought about and learned about to a national campaign that is asking Scholastic to make changes in the way they represent diversity in the monthly book orders that they send home to families.  It was a powerful and authentic final step in the work that we have been doing.

This work has been incredible. It has, at times, left me feeling doubtful. Doubtful of myself, of this world we live in, of the way we misrepresent so many of the people who surround us.  But ultimately, after watching and listening to my students, I was left hopeful. Hopeful because once my students began to see what was around them in new ways, they couldn’t un-see things anymore. They couldn’t not see.  They were running up to me when they came across stereotypes that were perpetuated in their books. They had their parents send me pictures from bookstores when they noticed books that either reinforced or fought against stereotypes in some way. They noticed things on the news, on t.v. shows, on social media. And I believe that noticing is one big step towards making change.

There were times during this work when I felt like I had to rush through. There were times when I questioned if I really had time to be spending on this work. But the truth is, there is no way that I don’t have the time. This world we live in needs changing and the students that I am teaching must be a part of that change. And so though it feels like there is never enough time to do things that we most believe in, this work has showed me that we must find a way.

I am grateful, yet again, for what my students have taught me. And grateful, even more, for the hope that they give me for this world of ours.