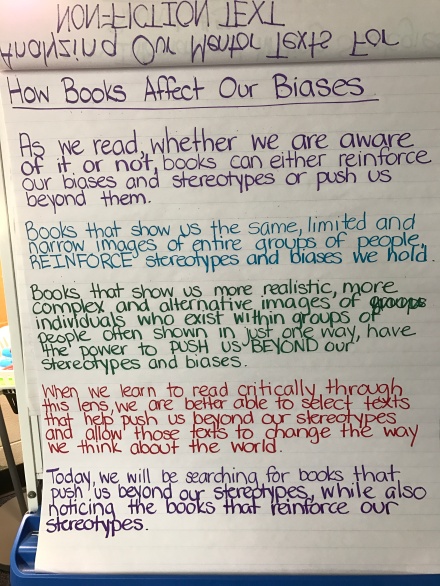 After working to help my students to confront their own biases, we decided to dig a little bit deeper into where these biases come from. In our previous lesson, we came to an understanding that ALL people carry biases.  Having biases, we discussed, does not make you a bad person. It makes you human. It is the result of being surrounded by biased images from the time you are a small child. It is refusing to confront these biases, to accept that they are a part of the way that you think, that becomes problematic. And if this is true, which my students and I truly believe that it is, then it is important to understand where these biases comes from. Where do these stereotypes originate? How do they become so strong?

If we can start to answer these questions, if we can begin to interrupt these biases and stereotypes as they form, then we have a better chance of changing our patterns of thinking so that we are not so influenced by the stereotypes and biases that we hold.  I truly believe that the reason that our biases and stereotypes have so much power over our thinking and our actions is because most of us have never stopped to really examine them and where they come from.

We have grown up being told that color doesn’t matter and that we are all the same inside and this has stopped us from having actual conversations, difficult conversations, that can help us to see that we DO see color and religion and sexual orientation and those things DO matter and they DO affect how we see others. And they shouldn’t. And we all can wish that they didn’t. But the only way to actually give our own biases and stereotypes less power over us is to confront them and examine them and work to disrupt our patterns of thinking that lead to them having so much power.

And so, within my own classroom, I want to work to do just that. With my students. So that together we can better understand where our biases and stereotypes come from. And maybe, just maybe, that understanding can lead to a change in our thinking.

So after our work with the images on the covers of picture books, here was the thinking that we were left with:

And so after our initial conversations, we were left with the question, “Where do our biases come from?”

After spending time looking at the Pottery Barn Kids website and writing down what they noticed, we came back together to share their thinking. The conversations were so powerful. They were so energized. They were so passionate. They were so hopeful.

My students brought up much more than just that they saw pink in many girls rooms and blue in many boys rooms. They noticed all the science themed rooms were in the boys sections. They noticed the limited range of interests represented in the girls rooms. They brought up how it was starting to be more okay for “boy” things to be marketed towards girls, but still not okay for “girl” things to be marketed towards boys.  They noticed that while Pottery Barn was clearly trying to do better in terms of how gendered their selection is, they still have a long way to go.

And then once we started looking closely at these messages, then my students began to share the many places that send us images that add to our biases and stereotypes. And so we started to chart other answers to our question: 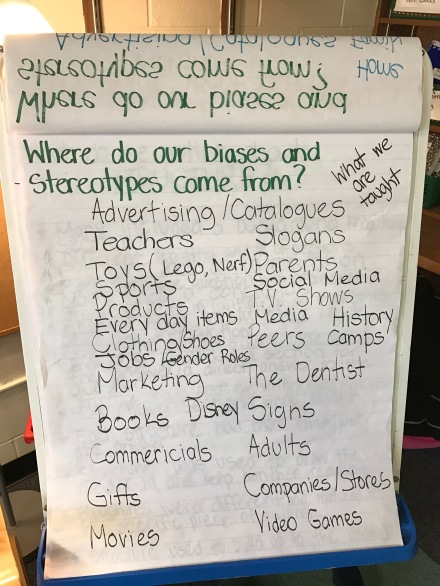 After looking at all of these places, we then started to look more closely at how the things that we read add to our biases and stereotypes. And so we began with the stories that we had been hearing the longest, fairy tales. We would do a close reading of a fairy tale in order to really see the gendered messages that were being sent in these stories. We used the close reading rituals outlines by Kate Roberts and Chris Lehman in Falling in Love With Close Reading. I saw them present two years ago when they were in Chicago and I am forever grateful for the brilliant close reading procedures they shared on that day and in their book.

We used THIS FORM to guide us through our work.

I began by reading a traditional version of the story “Sleeping Beauty.” I told them that we were going to use this story to look at how writers traditionally represented gender in stories. I asked them what genders were typically represented in fairy tales. This gave us a great opportunity to talk about the construct of gender and how there are more than two genders and all sorts of other important information that my students were eager to dig into. At the end of our conversation, we realized that traditionally, in children’s stories, only two genders had been represented. Male and female. So those were the two we were going to look at today as we read through this fairy tale.

The first time through, I just asked the kids to notice the difference between how male characters were described versus female characters. We shared our observations at the end.

At the end, i asked the kids to create a two-column chart with the word MALE at the top of one column and FEMALE at the top of another. Now, I recognize that these binary labels are problematic, however for the sake of looking at the characters portrayed in this fairy tale, they seemed appropriate.  I asked the kids to go back into the story and find all the words that they had underlined and then to list them under the heading they matched with. I did this work on a large chart while my students each made individual charts.

Once my students had their words listed, I asked them to then begin to sort them into categories. For example, they noticed there were many words on both sides that listed actions and so we decided to box all of those in one color. Then we made a category for physical descriptions, emotions and internal descriptions. Each category got a color and we put the words into boxes with those colors in order to help us see patterns that were developing. Here is what our large class chart looked like:

Putting these words into boxes allowed patterns to emerge that my students would not have noticed otherwise. We have talked often about how seeing just one word, just one time, is not usually enough to create biases and stereotypes in our minds. However, when we see the same things over and over again, they start to create patterns of thinking for us and that becomes problematic. So this step, it was important.

From here, I modeled for my students how we could make observations about what we saw and then interpret those observations to think about the potential messages they might send to the readers and listeners of fairy tales.

After modeling this for my students, I asked them to use THIS FORM to make their own observations and interpretations. After taking time to write on their own, we came together in small groups, and then in one large group, to share our thinking. And again, it was incredible.

And from here we ended up discussing what responsibility writers have to push beyond the stereotypes they might be surrounded by. Do writers have a responsibility to reflect the world around them or to imagine a better world that could be in the future? Do writers write what they know, even when what they know are problematic stereotypes? What is the importance of writers writing about the groups that they, themselves, are a part of? It was amazing to see my students engaging in the very discussions that are hotly debated in many spaces in the world of children’s literature.

After that day of sharing, I attempted to track some of the conversations that we had:

And so, what we ended up realizing is that books have incredible power. They can reinforce the stereotypes that we hold, but they can also help to push us beyond them.  And that led us to wonder about the books in our own classroom library.

In past years, I have had my students analyze the covers of the books in our classroom library in order to determine how our books represented or misrepresented different groups of people. That work was powerful and it was important and it led me to make important changes in the books I kept in my classroom library. It was a really important place to start.

But what I realized, what I have learned from listening to others, is that just having books that represent marginalized people in my classroom library is not enough. It is not enough to just ensure that there are characters of all races and religions and genders and gender identities on the covers of the books I own. I have to do more than just look at the covers, I need to start looking inside. I need to start analyzing HOW those characters are being portrayed. Are they being shown in multiple ways? Are they being shown in ways that reinforce commonly held stereotypes or are they working to push readers beyond those stereotypes?

So this is the question I posed to my students. This is the work we do this year.

I began by modeling my thinking as I read the book King and King, which is an incredible picture book about a prince whose mother is attempting to find him a princess to marry only to find out that it is another prince who ends up melting her son’s heart. I shared with my students that I was expecting the prince to fall in love with a princess because a commonly held stereotype is that all fairy tales include a prince and a princess. When the prince ended up marrying another prince, this challenged the commonly held stereotype by providing an alternative image and pushing my understandings.

We began this chart:

I then set my students off to examine the books in our classroom library. I gave them THIS FORM to use to analyze the books that they encountered. And they got right to work.

After having time to examine and analyze our books, here are the lists that we ended up with: 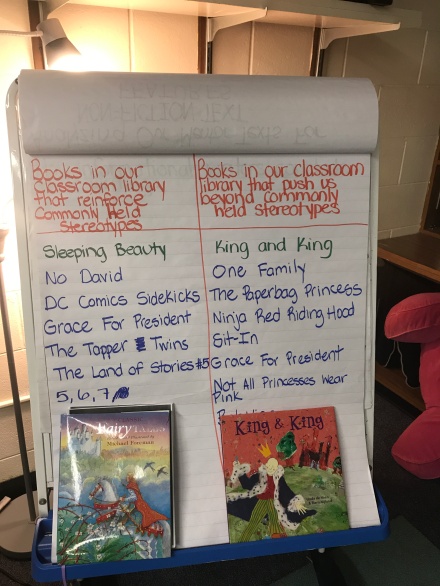 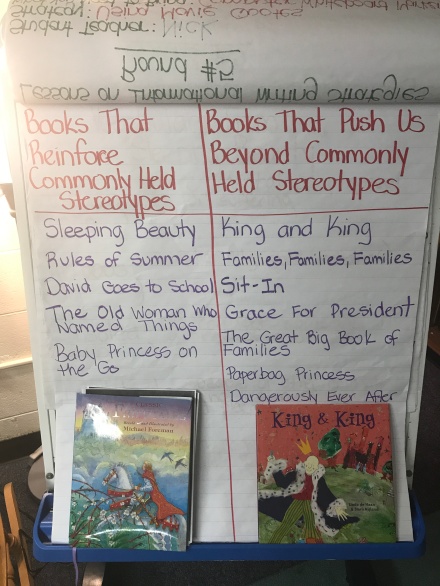 This work, looking at how what we read affects our own biases, then led us to even more powerful work as we started to examine how our own biases affect our understanding of what we read. That work will be described in the next post.