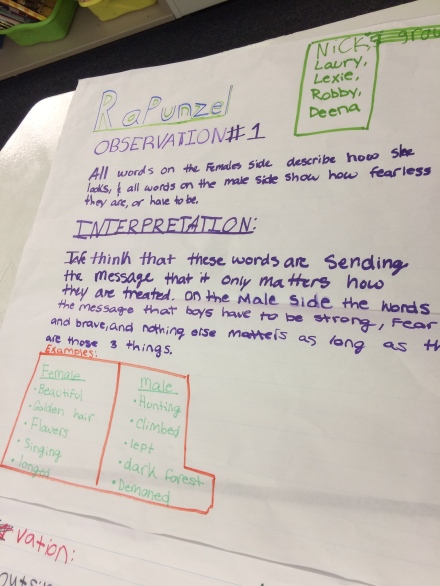 For the past several weeks, my students and I have been engaged in some inquiry work around the idea of how the things we read and the things that we are surrounded by send us messages that form biases and stereotypes that we are often unaware of.

We began by using the covers of picture books to help us recognize and confront our own biases on race and gender.  Here is an explanation of where we began.

We then moved on to looking at the messages on gender that are present in the advertisements we see every day and in fairy tales.  This is similar to the work that I did with my students last year and you can read about that work HERE.  As explained in the linked post, we began by making observations of the Pottery Barn catalogue. We used this form in order to begin tracking our observations of what we saw on the Pottery Barn website and what messages this sent about gender.

After using the close reading ritual described in the incredible book Falling in Love with Close Reading, in order to analyze the word choice used to describe male and female characters in five classic fairy tales, my students create posters that shared their observations and interpretations on the messages on gender being sent in these classic stories.  (If you are interested, here is the form that we used to help my students write down observations and interpretations from these fairy tales.) 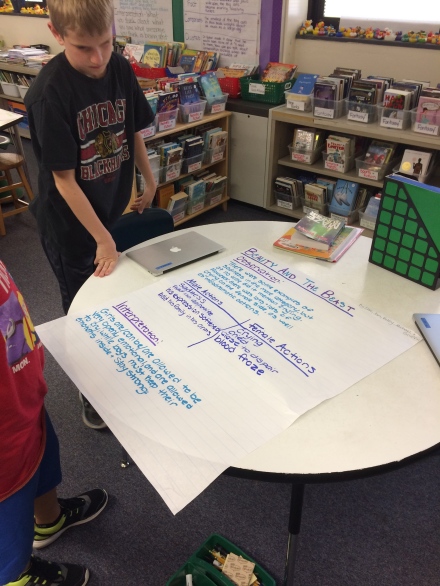 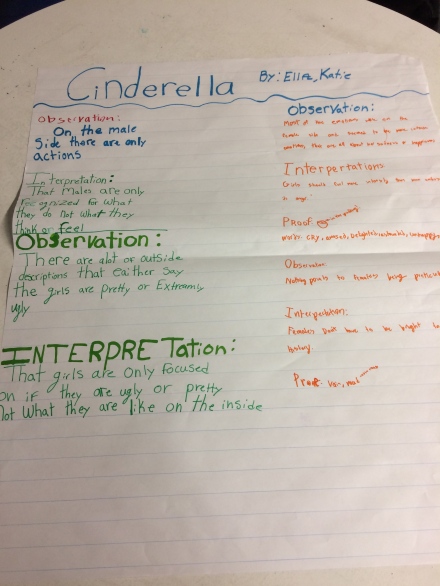 After observing the posters of all of the groups, my students added their observations of the messages being sent on gender through these fairy tales to a Padlet.  Here are the Padlets from my two classes.

After completing this work,  I shared with my students that we were going to move from looking at texts that were written many many years ago to looking at books that were written closer to today. I said that in some of the current day books we were going to look at, we would still see the persistence of many of these gender stereotypes. I also shared that there were some picture books being written today that were really trying to get people to rethink what they believe they know about gender.

As an example of one such book, we looked at the book I Am Jazz, which is the real life story of Jazz Jennings who wrote about what it was like to grow up as a person who is transgender. The timing of this could not have been more perfect, as it coincided with HRC’s planned day of action, when community readings of this book were held in order to show support for transgender youth.  I planned to read this book as a part of this day of action and was pleased that the timing worked out so well.

And that is a shame.

Because after reading this book with my students,  we had some incredible conversations on what it means to be transgender. I watched my students become more empathetic and more full of understanding. I was so moved by the discussion that I wrote down a few of my students comments.  Here are some of the things that they said,

“I think that most of the hate that people feel really comes from people not understanding what it is like to be a person who is transgender.”

One of the things that my class has talked a lot over the past few week was how harmful stereotypes really are. Not only do they make people believe that there is one right way for them to act, but they also cause such harm to the many people who do not fit comfortably inside of the boxes that stereotypes draw for us.  There are so many stereotypes that are reinforced in our world and often we don’t even stop to notice them. So we are unaware of when we are making judgements of right and wrong based solely on the incorrect ideas that have formed in our minds of what is the way a person is supposed to act.

One of the reasons that I believe so strongly in doing the kind of work that we have been doing is that I believe our students need help in recognizing the messages that surround them.  The messages that tell them what to think about people of a certain gender or race or religion or any other number of things. Unless we help our kids to see these messages, we don’t have any hope of helping them to break these messages down. And I truly believe that if this world has any hope of getting better, then it has to start with our kids and that means it has to start with us.

In my next blog post, I will share what happened when we moved on from simply looking at messages on gender to also looking at messages on race and family structure. I will also share what happened when my students took to my own classroom library to see how well it fairly represented different races and different genders.  Let’s just say that I am not nearly as far along in creating a diverse library as I thought I was.