Many of my students have grown up hearing repeated messages from the adults they are surrounded by that sound something like this: “Skin color doesn’t matter.” “Everyone deserves to be treated equally.” “We are all the same inside.”

Now, of course, these are wonderful things to say.

However, what worries me is that these cliches often stand in place of the real, difficult conversations about race and gender and religion that need to take place in order to really begin to break down the biases and stereotypes and prejudices that are standing in the way of allowing us to reach a better place of understanding and equality.  Another side effect of growing up only hearing these somewhat empty phrases is that many of my students, and many of the adults in this world, truly do not believe that they, themselves, carry any biases or prejudices.  For the most part, I believe that is simply not true.

One of the hardest things that I have had to do in the past few years is to really reflect on my own biases.  I had to look at the very ugly truth that I did carry beliefs about people based on their skin color or ethnicity or gender.  I still do.  Now, I am also actively working to acknowledge my own biases and then trying to dismantle them. But that does not come quickly. And none of that happens without honest, sometimes uncomfortable, conversations.

This year, I really wanted to find a way to help my students confront their OWN biases and prejudices.  But, as I said, this is made so difficult by the pre-packaged responses that I knew I was going to get when I began the conversation. So I looked to where I always look, my books.

One of the things that I have thought about a lot over the past few years are the books that fill my classroom library and the books I choose to read to my students.  As I work to fill my library with books that better reflect the diversity of the world we live in, I realize what a terrible job I had done with this in the past. The VAST majority of the books that I had that showed African-American characters on the cover were in my historical fiction bins.  And I am pretty sure that this resulted in my students believing that any picture book that featured an African-American person on the cover, was going to be about the Civil Rights Movement.  And in this way, that I never, ever intended, I am pretty sure that I was starting to send the message to my students that every book with an African-American person on the cover was a book that was going to be about struggle or sadness or hardship.

Now. Please do not misunderstand. I am NOT saying that I wanted to stop reading books about the Civil Rights Movement. I do NOT believe that I should be reading fewer books about the struggles that come along with being black in America. I do NOT believe that I should be bringing into my classroom library fewer books that deal with the real life hardships associated with racism.  I actually believe that my students need more of these books.  However, that is just one piece of what it means to be African-American. That is just one story. And as one of the most powerful TED talks that I have ever seen, taught me: there is such danger in a single story.

I was starting to think that I had really done a disservice to my students by not seeking out enough books that had African-American characters, or other characters of color, that were simply stories about being a human being. That were funny stories.  Or joyful stories. I think that by limiting the types of books that I had in the classroom, I was sending the wrong messages to my students.

And that made me think.

By asking students to make predictions on what picture books were going to be about, might I be able to expose some of the biases and prejudices and stereotypes that they carry around?

So I began to create a small experiment.  I paired up books and covered all the words on the covers of the books so that only the images remained.  I was extremely purposeful in choosing the books that I wanted to use and I used books that I believed would go AGAINST the stereotypes that my children had on gender and race. I wanted to point out that these biases existed.

Here is what the pairs of books looked like: 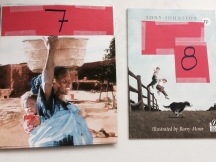 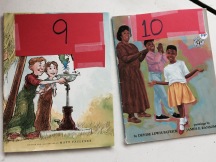 I then wrote up short summaries of each of the books and created THIS GOOGLE FORM in order to ask the students to match the two summaries to the two books in that pairing.

When I introduced the activity, I was not entirely honest about what we would be doing.  I shared with the students that in our last reading unit, we focused on using clues within a text in order to synthesize what the author’s message about the world was. What the author hoped to convey about the world through her writing.  I told the kids that now, we would be looking at the clues on the outside of a text in order to help us infer what a text was going to be about.

And then we began.

I held up each pair of books, one at a time, and then read out the summaries. Each student had a computer open to the GOOGLE FORM and they matched the summaries I had written to the books that I was holding up.  We moved through all ten books this way and when we were finished, we looked at the results.  Because we were using a Google form, I was able to share with them the results right away by looking at the summary results (which show up in nice little pie charts).

I was happy to see that I was wrong about the first set of books. I worried that the children would assume that the book with African-American characters would be about the children who were unable to afford books. I assumed this because I have heard this stereotype spoken in my classroom in the past. But in my first class, it was a perfectly even split of guesses (though someone guessed the same book twice)  and in my second class, they results were opposite of what I expected.  And I was thrilled.

But then we went further.

And then came the next few sets of results. I could feel my heart sinking as we looked at set after set of results. At this point, I still did not really share with them what I was trying to do. But I did tell them, with each new set, what the correct answers had been. And I watched their confusion grow. And my heart continued to sink.

Let me be clear, my heart was NOT sad because I thought that the beautiful children sitting in front of me were bad people with bad hearts . In fact, it is just the opposite. My students are incredible human beings with big hearts and an extreme amount of compassion. And, still, they were carrying around (as we all do) these biases that were a direct result of the messages that our society has surrounded them with.  And biases that were a direct result of the books that we, as teachers, have surrounded them with.

When we got through all of the results. I shared with the students that what we were really going to be talking about was bias and stereotypes. And I watched their faces. As I began to explain more of what I had been thinking and what I noticed, I watched the looks on their faces as they came face to face with their own biases. I listened as they worked to make sense of how so many of them could have gotten almost every single guess wrong. I listened as they tried to reconcile the fact that they, themselves, carried biases and stereotypes and prejudices that they never knew they had.

It was a powerful moment for all of us. And a moment that showed us all just how much further we have to go.

One of the hardest pieces of data for me to look at was the results for books 7 and 8.

In both of my classes, the majority of the students thought that book 7 was the book about dealing with sadness and struggle and loss. And most students thought that book 8 was about the joy that exists between family members. After revealing what we were really looking at, I pulled up these two books to look at with my students.  I shared that even though book 7 had a woman smiling on the cover with her baby attached to her back, still most of us assumed the book was about struggle and sadness and loss.  I pointed out her big smile. I pointed out her child and several students said, “Oh! I didn’t even see that!”

And I think that is the point.  They didn’t see the evidence that could have helped them because I think that what they saw instead was the skin color of the woman on the front and the background that reminded them of a place they thought they understood.  And this is what guided their guess.

I shared with my students that I also carry biases. I wish that I didn’t. But I have also been exposed to many different messages throughout my life. And the fact that I carry biases does not make me a bad person. However, what I do believe is harmful, is refusing to look at and acknowledge our own biases. I believe that what makes a person brave is being willing to look at our own biases and then actively work to understand them, understand where they come from and then dismantle them bit by bit. And this was my hope for the work that we would do together.

And because I teach two groups of wonderful children, I then listened to powerful conversations that came from what they were noticing. I listened to them try to make sense of all of this and then, even more impressively, I listened to them share that they wanted to understand these biases better so that they could work to dismantle them.

So after looking HERE and HERE at our data, I asked the students to craft an inquiry question that might guide our next phase of learning. And in each class, we came up with a similar version of the following question:

And so that is what we will set out to discover next.